I just realized that it’s the end of the month, so I need to do a quick post for OPAM.  I actually have 3 finishes this month, although they aren’t large.  I feel good about the progress that I’m making on my list though.

I finished this topper earlier in the month when I got my quilting machine back.  It’s all straight-line quilted using rulers.  I need a LOT of practice with rulers!! 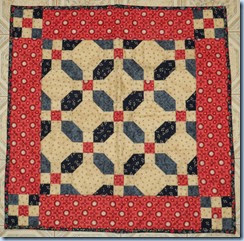 This next piece was just finished over the weekend, and it was quilted from a stencil.  I need a LOT of practice using stencils and following lines!   But this was a disaster from the beginning, so I figured it would just be a practice piece.  This should only be viewed from a galloping horse, preferably at night. 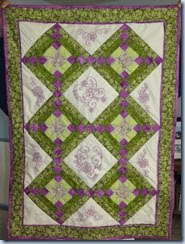 And then the little wall hanging that I did at my retreat.  The spools on the left are pieced, and the crow, spool and pincushion on the right are wool applique.  I love working with wool. 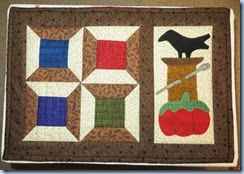 I have many other projects in the works, and I’m constantly stitching.  I’ve also been prepping some handwork for the car next week, because we’re going on an adventure!  My oldest nephew is getting married in Florida, so we’re heading south, hopefully getting away from this: 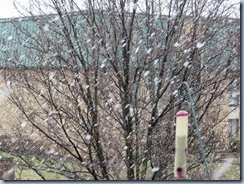 Yes, that is snow, not cherry blossoms.  It was taken yesterday.  That’s it.  I’m done.  No More Snow!!!  So anyway, we’re heading to Florida, by way of Arkansas, Mississippi, Alabama, and Louisiana.  Not the most direct route, but I need to visit the four other states to bring my total of states visited to 47!  We’ll also be stopping to visit family members in Tennessee and North Carolina, so it will be a very busy trip.

I enjoyed stitching on Friday night with friends all over the world.  I’ve been working on the stitchery part of a small quilt I’m making.  I finished up today, so should have a quilt top to share with you soon. 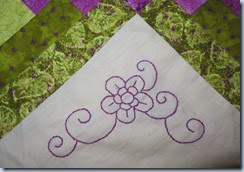 Last weekend I attended my guild’s Quilt retreat.  On the first night, I whipped up this little wall hanging as a warm-up project. 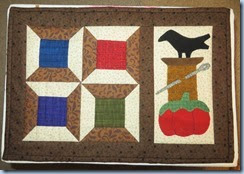 Then I moved on to a quilt that I took to the retreat last year as well.  When I started cutting it out, I realized I didn’t have enough reds, although I purchased the two charm packs that were recommended.  So I bought more red fabric, and started cutting and stitching. 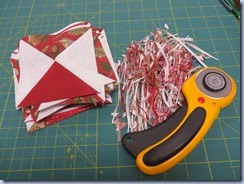 I sewed it in rows, and I was stitching the very last piece on each row when I realized a huge oops!  I had to unstitch nearly every piece and start over.  Thankfully, it was a Schnibbles and not a large quilt!  I present Brocante!  It’s now in the to-be-quilted pile. 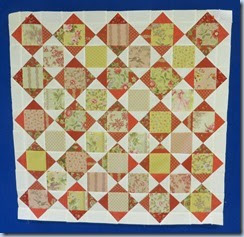 I also started another top, but I didn’t get far enough to show here yet.  I hope to make some progress on it tomorrow.

Look what arrived in my mailbox yesterday! 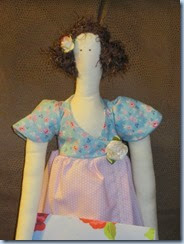 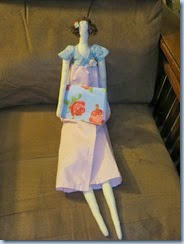 Several months ago, my new friend Leanne and I were chatting after she returned home from a trip to the US.  I offered to send her some Mickey Mouse fabric, and later added some Halloween fabrics.  Fast forward a few months to when I asked Leanne if she would consider making a Tilda doll for me after seeing the beautiful doll on her blog.  She said she would, and she refused payment because of the fabric I had sent earlier.  That was my first unintentional swap.  Thanks Leanne – I love my Tilda!!

Michelle was my next unintentional swap partner.  She mentioned a quilt book that she was looking for, and she found that it was out of print.  I happened to have the book, and although it had beautiful quilts in it, I knew I was unlikely to ever make one, so I offered the book to her.  I wasn’t expecting payment for it, but she sent me some of her wonderful patterns!

If you don’t already know Leanne and Michelle, you should pop over to their blogs.  They’re both extremely talented and I’m proud to call them friends. 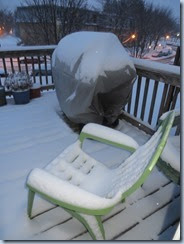 We had snow again earlier this week, and there’s a possibility of more next week.  But…. we had the chance to do some yard work today, and DH grilled out dinner!  I have to believe that Spring will eventually get here.

I’ll leave you with a Spring picture from last year. 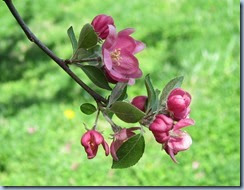 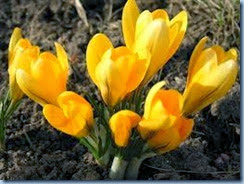 Is it Spring?  The crocuses are starting to bloom, and there are Robins everywhere.  It’s going to be very cold tonight and tomorrow, and then the warm temperatures return.  Hopefully it will stay warm.  Most of the snow is melted, and I don’t want to see any more!

I spent FNWF sewing the binding on this little quilt. 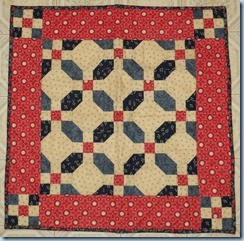 The quilting on it isn’t fancy, but it was done on my Sweet 16!  It’s all straight lines, following a ruler.  On Saturday, I went to a not-so-local quilt shop to look at other rulers.  Unfortunately, they had packed up their floor model and all the rulers and had taken them to an expo.  What a disappointment.

I also worked on the next border of my Relaxing Robin over the weekend.  Our assignment was to add a border with triangles.  Do you think this qualifies? 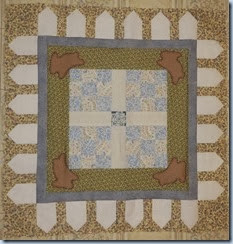 I’ve had a great idea for adding tails to the bunnies, so I’ll get that done before next month.

On Monday I celebrated a birthday.  I received a lovely package from Maria. 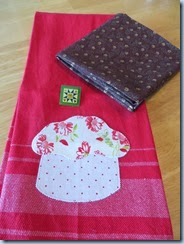 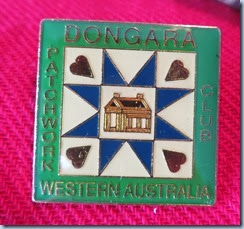 The table runner colors are beautiful!Several months ago, I admired the pin from her Patchwork Club, and now I have my very own!  Thanks Maria.

Last year, Anthea and I discovered that we share the same birthdate.  She suggested that we do a swap this year, and this is what she sent: 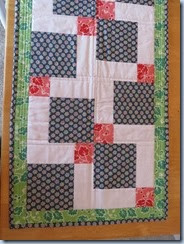 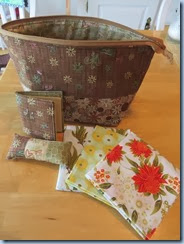 Another beautiful table runner, and a wonderful pouch, complete with tiny little pincushion and needle book.  I’ve already filled the pouch with supplies for the Crazy Quilt class that I’ve signed up for.

Here is the sewing machine cover that I made for Anthea.  Apparently, I didn’t take any pictures of the other side, which has Anthea’s name stitched onto it. 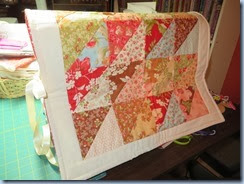 I’m off to another retreat tomorrow afternoon, so I hope to have more to show next week.  And does anyone remember the SAHR from a couple of years ago?  I’ll be revisiting that very soon.

I’m running late – as usual.  But I have a good excuse.  It’s Retreat Season.  I’m currently at my second of three retreats in a span of four weekends.  Las weekend was a small quilt retreat at a wonderful B&B about an hour from my home.  Unfortunately, the proprietors have decided to retire (again) so this was the last gathering for our small group.  We’re hoping to find another suitable location to continue the tradition.  I did not take a single picture, because I was too busy creating quilts.  One top was completed, another just needed borders when I left, and a third was over half finished.  I’m happy to say that #2 now has its borders, and #3 has made good progress. 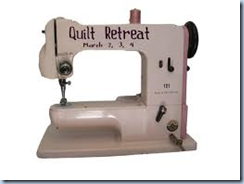 I’m at a scrapbook retreat this weekend with my college roommate.  Since I discovered quilting, my heart is no longer in scrapbooking, but it’s a great way to spend time with my friend.  I’m working on my Alaska trip so it’s fun to reminisce about the cruise we took last fall.  I’m so ready to go again! 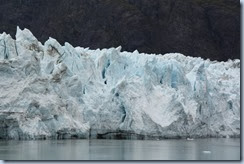 We are in for yet another major snow storm tonight and tomorrow.  My work computer is in my car as I’m expecting yet another snow (sew) day at home tomorrow.

On the bright side – my Handi Quilter Sweet 16 returned home on Friday.  I can’t wait to get home and get reacquainted.  Although I’ve had her for several months, I’ve used her a grand total of twice.  And then she stopped working.  I finally had to send her back to the store where I purchased her, and they eventually had to return her to Handi Quilter to be repaired.  I have big plans for her, so she better be rested up and ready to work! 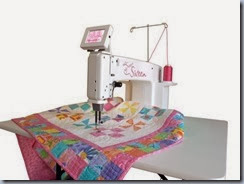 Because of retreats and WIPs this month, there are few finishes.  I did finish a Christmas gift that I can’t share, a birthday swap item that I can’t share, and I tiny little Valentines’ quilt.  I didn’t follow the pattern exactly, because I was only using from my stash, but I’m very happy with the result. 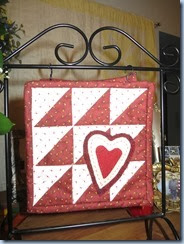 I also added the February addition to my Relaxing Robin piece.  We were to add applique.  This is going to become a baby quilt, and now that I’ve started, I have a plan in mind. The March assignment is to add triangles, and I have a really cute idea that I hope to execute. 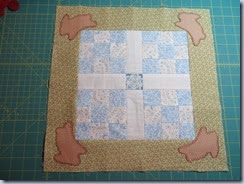 Off to do some scrapping…and looking forward to sewing later today.