I almost forgot!  Last year I saw a challenge on Tracee’s blog for a shirt challenge.  The challenge was to make a quilt using only the fabric from 6 shirts and one additional fabric.  We could also use other fabric for the binding and backing. 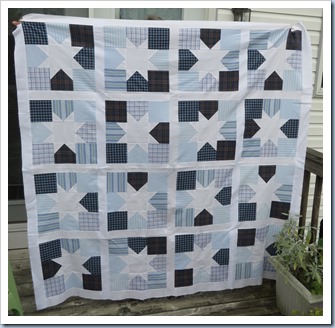 I already had a stack of shirts that DH was getting rid of, so this was perfect for me.  Terry from Terry’s Treasures was also doing a SAL of Charming Stars, a free Moda pattern.  When I saw that my friend Sheila was going to combine the two projects, I blatantly copied her.  Thanks Sheila!

Sadly, my poor quilt is not yet quilted, but I’ll do my best to get it finished in November.  And would you believe I have enough fabric squares left over that I could make another entire quilt?  It’s amazing how much fabric can be salvaged from 6 shirts. 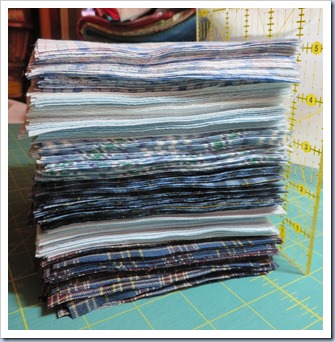 Hop on over to Tracee’s blog to see how creative all the other ladies were! 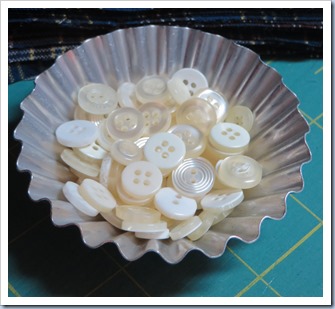 They say time goes much faster as you get older, so I must be getting really OLD!  Can you believe October is gone?  October is one of my two favorite months.  It’s such a pretty month.  DH was gone for nearly a week, but I wasn’t going to waste an October weekend, so I went hiking at a lake that I hadn’t been to in years. 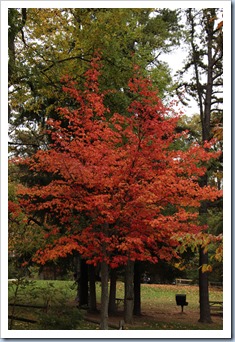 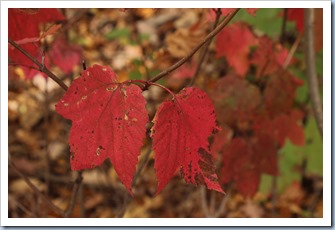 When I left home, I was wearing a hoodie and the sun was shining brightly.  By the time I reached my destination, I had driven through two rain showers, and a SLEET storm!  Sleet!!  I added another fleece jacket, a waterproof wind jacket, and gloves before setting out on my hike.  It was actually a gorgeous day, but quite cloudy so most of my pictures are too dark.

The following weekend DH and I drove down to Skyline Drive in Shenandoah National Park.  We usually avoid that in the fall as it is a very popular destination for leaf peepers and is quite crowded.  Going during the week was awesome!!  The colors were at their best. 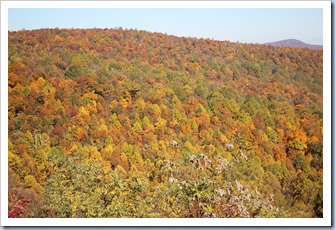 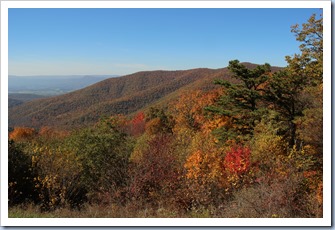 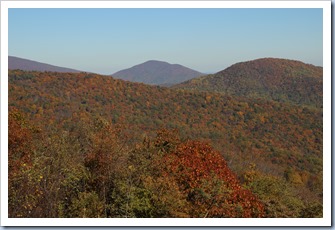 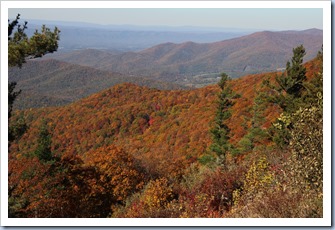 We took two short hikes, and I started feeling sick during the first one.  After we had our picnic lunch I was feeling better so we tried a second hike.  Not a good idea.  I went to bed as soon as we got home, at around 8:00, and spent the next three days in bed.  Now DH has it.

Following my recuperation, I spent much of my time cross stitching, and put the final stitch in Santa’s Village last night.  Once it is washed, ironed, and has the buttons attached, I will be proudly showing it to the world!!

My two finishes for the month include a wall hanging that used some brown scraps for RSC.  I have another  brown project started, but it is not going to be a quick finish. 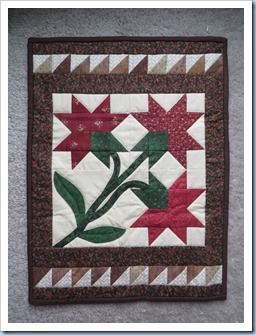 I chose not to make a brown doll quilt, so used some scraps from another quilt that I recently made. 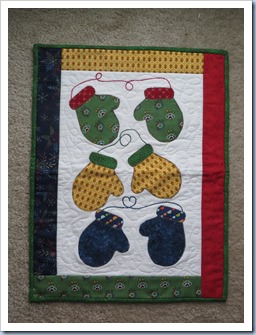 Unfortunately, the organization that I was making the doll quilts for no longer needs them, so I have a collection of 10 quilts if anyone knows of another organization that might be able to use them.  They’re all approximately 14x18”.

I also made two new name badges for two guilds, and my sewing machine has a name badge too.  At my last retreat, someone slapped a post-it with my name on the back of the machine, and my name was spelled wrong!  So now there’s a cute little tag with the correct spelling.

Next weekend is Retreat again, so I’ve spent the last couple of days cutting, cutting, and cutting.  Two quilts are prepped and ready to go, and I hope to cut out another today.  I can’t wait! 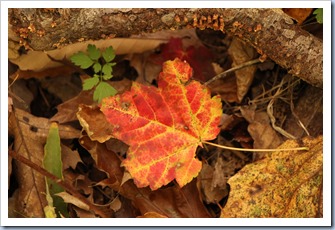