The Snow and Ice Continues

Maybe I need to change my header photo, to reflect current weather conditions.  Or maybe we'll just stick with the more cheerful flowers.

On the bright side, the nasty weather allows for plenty of stitching time.  I finished my Burgoyne for my UFO challenge for my small group.  Although we're not meeting, we're continuing with our challenge.  I think I finished piecing this at a retreat last February.  It spent entirely too much time in the to-be-quilted pile.  This was inspired by a picture in Edyta Sitar's Patches of Blue. 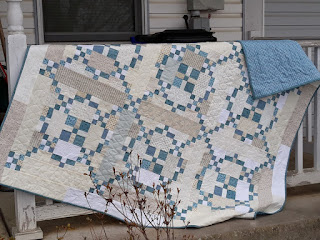 I also finished stitching Lori Holt's Sew By Row.  Now I just need to decide how to finish it and get it on the wall.  I have a few other older cross stitches that I'd also like to finish, so maybe some of that will happen this week. 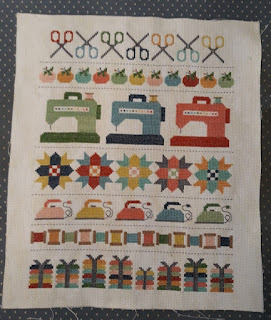 My Winter Village is continuing to grow.  Because I bought a fat quarter bundle instead of the kit, I don't have enough fabric for the sashing and borders.  I may make a quick trip to a fabric store tomorrow.  And I expect to have another quilted finish by my next post.  I might be able to finish quilting the final border tomorrow, and get the binding attached.  Then a little binge watching on Netflix for a couple of evenings, and I'll have a finish.   My To-be-quilted pile is dwindling!!

This lovely item showed up in my mail yesterday from my friend Di.  It's so bright and cheery, and I just love it.  Thanks Di!! 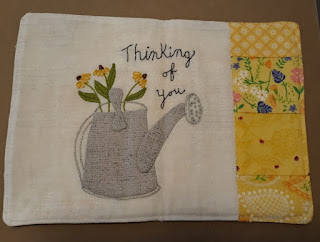 So what's happening in your part of the world?  I hope you're all staying healthy!
Keep on stitching,
Peggy

Yes, we got snow.  Again.  I think the official total for our town is just over 10 inches.  If you're a weather wimp like me, that translates into a lot of stitchy time.  I'm old and retired, and I just don't go out on snowy roads anymore.  It snowed all day on Sunday and Monday, and I swept off the sidewalk a couple of times.  Once it piled up too much, I just left it for the HOA guys to deal with. 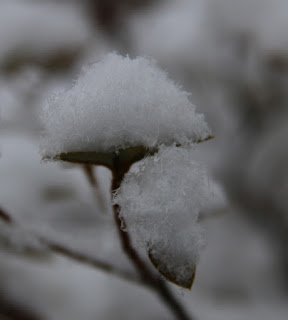 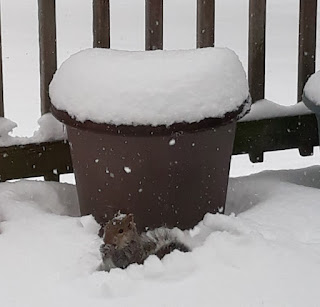 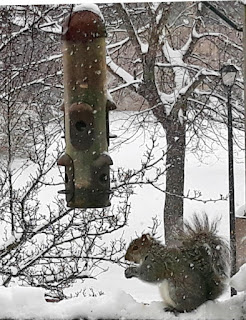 Most of my time the last couple of weeks has been spent on a cross stitch project, Sew By Row by Lori Holt.  I will probably finish it later today.  I have nearly finished the last row since I took this photo. 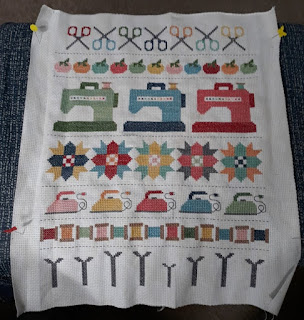 When I cut my fabric, I didn't allow enough extra on the sides to be able to frame this, so it will be made into some kind of wall hanging, with a fabric border.  Naturally, it will go in my sewing room!

I also made a little wall hanging for my bathroom, which is being redecorated.  I chose the colors to coordinate with an extra shower curtain that I've had.  But once I hung the curtain up, I don't like it, and it's way too short!  I'm currently working on Plan B.  I already had the pegboard, so I'm trying to work with that in  some way. 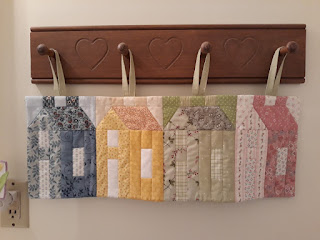 And while I haven't officially linked to RSC21, I am going to be working with my rainbow of scraps this year.  I made some pink hexies in January. 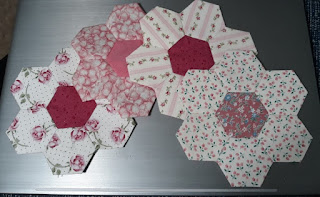 I've also been reading more and trying to cook more.  There have even been some new recipes!  Life is good!