Eagles, and Pelicans, and Geese - Oh My!

Yesterday’s adventure took us to the Eastern Shore area of Maryland.  Destination:  Blackwater National Wildlife Refuge.  Back in about 2006, I became addicted to watching an Eagle Cam at NCTC, not far from my home.  I was also introduced to the Osprey cam and Eagle Cam at Blackwater.  It’s so much fun to watch the Eagles preparing their nests each year for raising their new families, and then watching the  eggs hatch and grow.  A few short months later, they are larger than their parents when they take their first fateful flight from the nest.  I’ve read that the statistics for first flights aren’t very good, but all the eaglets that I’ve watched have made it back to the nest safely.

Yesterday we went to see the Eagles.  And the Snow Geese, and the White Pelicans.  (for you Maria!)  A couple of years ago when I posted some pelican pictures from Florida, my friend Maria asked why they had so much brown on them.  Ummmm….because they’re Brown Pelicans! 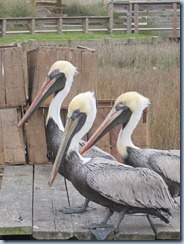 Maria had only seen White Pelicans, and I had never even heard of them.  So we send each other pelican pictures and postcards from time to time.  I recently read that a rare flock of White Pelicans winters at BWNWR!  I must see these!  So off we went on our weekend adventure.  We went to the Visitor’s Center to ask if the pelicans were still there, and inquired as to the best place to see them.  In the past few days, there had only been a couple of sightings, and only of one pelican.  I was crushed.  What are the chances that we would find the one pelican on the whole refuge?? 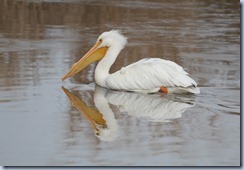 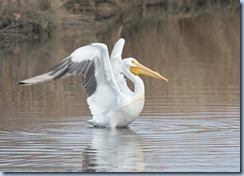 Pretty good chances, as it turns out!  These pictures were taken by Mr. QD, as my camera batteries died earlier in the tour.  He also got some nice shots of a Great Blue Heron. 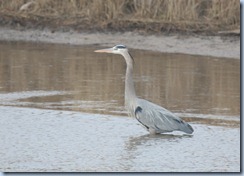 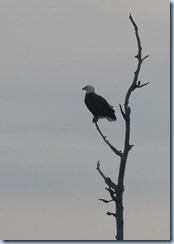 There were some Eagles, but we didn’t get very close to them.

I am still in awe of just seeing them. 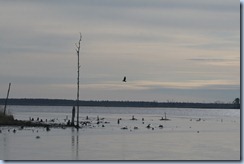 When we saw the enormous flock of Snow Geese, we took pictures, but kept hoping something would agitate them and cause them to take flight.  \ 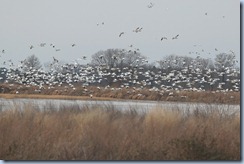 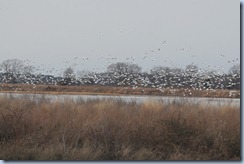 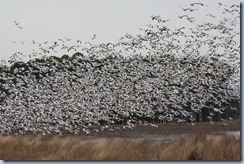 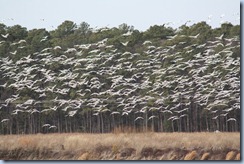 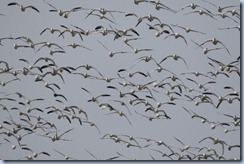 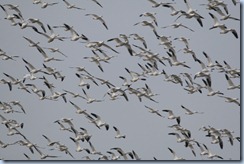 What an awesome sight!  I’m so glad I’m not a bird in weather like this.  This is how I was dressed, and I certainly wouldn’t want to be in the water. 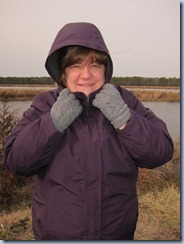 After completing the Loop road through the refuge, we followed the road down to Hooper’s Island.  There is a small community on the island, but not much to see on a cold windy day in February. 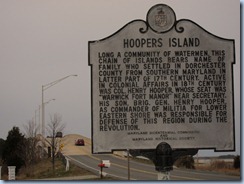 When we drove back up past the refuge, the field on one side of the road was covered with Snow Geese. 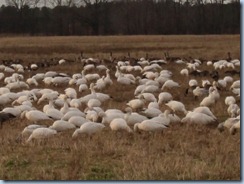 Cars were lined up along the road taking pictures, and I was able to get a few shots with my pocket camera.  Then we were off to dinner.  We went to a restaurant that one of my bloggy friends had recommended a few months ago, but I don’t remember who it was. 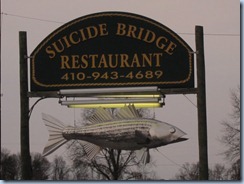 Dinner was delicious, seafood for me and duck for DH.  then came the worst part of the day – the drive home.  It started snowing as soon as we left the restaurant, and it snowed the entire way home, a nearly 3 hour drive.  Surprisingly, we didn’t encounter any slippery roads, although DH was driving, and I wished he would slow down.  He missed one exit that we usually take, and when I asked him where he was going, he got all flustered, and said he couldn’t be expected to watch the road and everything else!  Ha!  I thought that was the driver’s job.  silly me.  But we made it home safe and sound.  But I just this minute realized that I didn’t take a single stitch yesterday.  Must get off here now and make up for that! 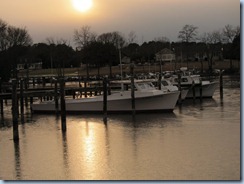 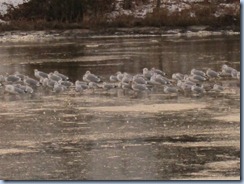