The snow mountains have begun to recede.  We got out of the house today for something other than shoveling!  While we didn't have the required wind speeds for our snowstorm over the weekend to qualify as a blizzard, we had 'blizzard-like' conditions and nearly 30 inches of snow.  That's about 75cm to the rest of the world.  That's a lot of snow for us.  And a lot of shoveling.  Fortunately I had some help or I'd still be out there trying to free our cars from the drifts. 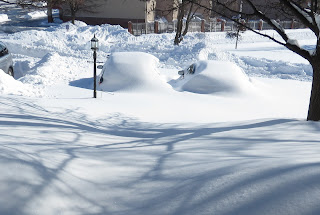 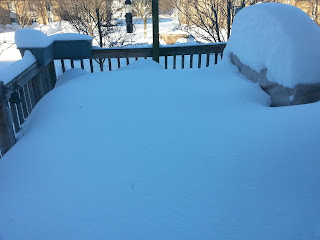 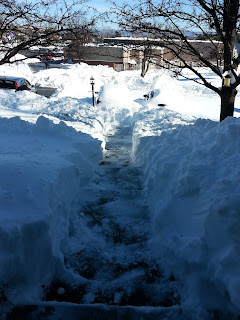 Of course, Snow Days = Sew Days!  And cleaning days.  I've spent a LOT of time lately trying to make my sewing/crafting room a more pleasant place to work.  And that means getting rid of a ton of stuff.  I've taken stuff to the Salvation Army, Parent-Child Center, Hospice, my sewing groups, friends, family, and some to the trash.  I've spent days shredding old records and statements.  Why did I still have some of this stuff?!?

Retreat is in a couple of weeks, and I've also been kitting, cutting, and prepping projects for that.  I'm going to plan on working on several smaller projects this time, so I can cross off more from my very long list.  I always take too many projects, but want to have something extra to work on in case I get bored. or forgot some crucial item.

RSC16 is off to a good start, and Blue is the color for January.  I'm going to attempt three different projects this year, as I barely made a dent in my scraps last year. 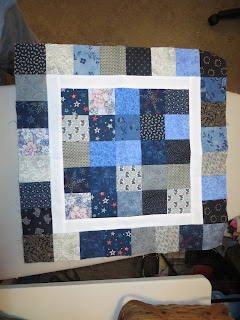 Not sure what this is called, but it's 16" and will be sashed with another white strip when the quilt is assembled. 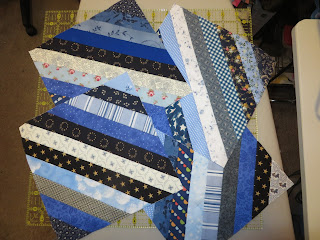 I hope to do at least 4 string blocks each month.  I started with paper foundation, but found that muslin worked much better for me. 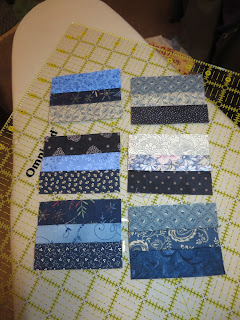 And these will eventually be small spool blocks.  I need to get some brown fabric to complete them.

I don't precut my scraps like many quilters do, so this took awhile, but I got in the groove and cut all the sizes at the same time, and then assembling them went rather quickly.

I joined Gifted Gorgeousness (GG) again this year, but I didn't get anything stitched for January.  My project is Snow Days, designed by Kaaren Johnston of The Painted Quilt.  I won the pattern AND the fabric to make it in a drawing on Kaaren's blog a couple of years ago.  I should be able to get started on the stitching in a few days. 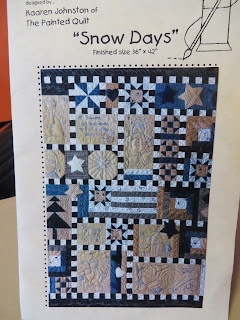 Knowing that Snow Days was on my to-do list, and knowing that it contained several embroidery blocks, I treated myself to a new light pad last year.  I'm not a fan of tracing while standing at a window, and my old light box was a joke.  Anyway, the new light pad is very thin and seems to be somewhat fragile, so I thought it needed a padded case. 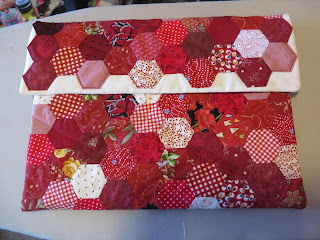 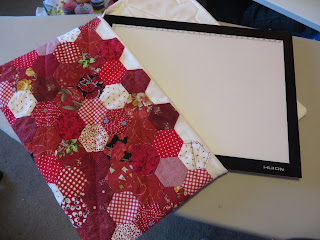 I showed these red hexies in progress several months ago, and was stumped on how to assemble this.  It's a simple envelope style, and it's finished, and I totally lost interest in it so the construction isn't the greatest.  But did I say "it's finished"?  And I used up some red scraps!

I've been doing a lot of cross stitching since I finished Santa's Village.  This pattern was purchased a few years ago, and finally made it out of the basket.  There is a plan for how it will be finished, so you'll be seeing it again soon.  yeah, how many times have I said that?? 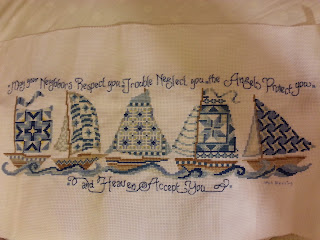 On a final note, I purchased some socks today.  They are in an envelope and heading to the Post Office tomorrow for a very special destination.  I didn't think to take a picture of them, but please check out this link for a Very Special Project.  You'll want to buy a pair of socks, too!

(Picture borrowed from Confessions of a Fabric Addict)