After a lot of thought, I have chosen "contentment" as my word for 2012.  In searching for a quote, I found that to many, contentment is a negative rather than positive state of being.  After a year of great discontent, I consider it to be a desirable way of living.  Being content with what I have - not always wanting or 'needing' something that is out of reach.  So CONTENTMENT it is.

I have been extremely busy during this week in between Christmas and New Year's.  My plan for 2012 is to finish many of the quilts in my sewing room that have yet to be started.  But before I can even start, I needed to get some UFOs out of the way.  So I sandwiched, quilted, and bound the Little Baskets quilt that I pieced last summer.  This involved an emergency trip to the LQS because I was about 5 inches short of the binding that I needed. 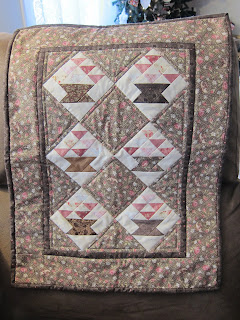 After making some wall hangings for Christmas gifts, I had enough 'tree' fabric for two more wall hangings, so they have been finished off and put in the basket for gifts next year.  Yippee!  I'm already started on 2012 gifts. 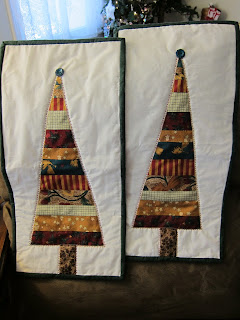 The stitcheries 5,6,and 7 from Lesley's Stitch a Long had to be stitched. 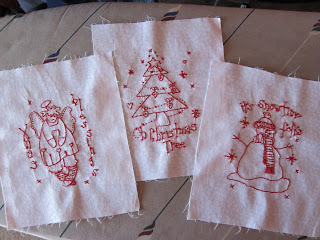 I don't know what happened to 1-4, but I'm sure they'll turn up as I continue to work my way through the sewing room.  There was a small 'incident' involving some sloshed tea, but I think I was able to get it all washed out.  If not, the entire set will be tea stained before I continue.  What did you all make with yours?  I don't plan to make a banner, so probably another wall hanging?  Any suggestions would be welcome.

I also made my December and January blocks for BSA, and they've been mailed out. 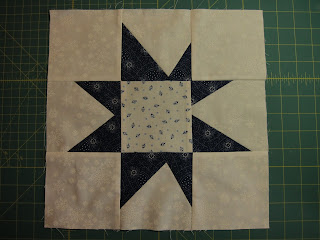 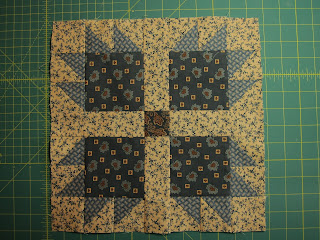 Next up was to work on my kitchen curtains.  Remember the curtains that didn't get made with vintage hankies?  Well soon after that, I found a wonderful tablecloth, and it was 75% off!  I just cut it in half, hemmed the raw edges, and folded over the top.  Totally the 'look' that I was hoping for. 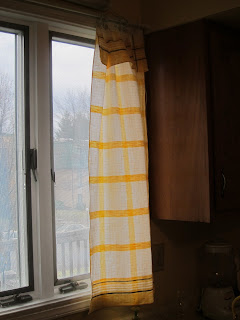 I couldn't get a good picture during daylight, so I'll try again after dark.  The curtains barely cover the window, but we seldom close them, so I think they'll be okay.

Next up was to make a few thank you cards.  Thank you cards are a thing of the past in this world, but I still enjoy sending them out. 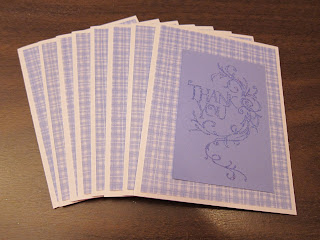 My current cross stitch project is coming along nicely, and I work on it in the evenings while watching TV.  The sample on the pattern shows this made into a beautiful pillow. 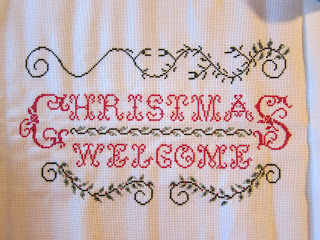 For the next three projects, I had the tops done, but still had to make backings and bindings.  My Christmas quilt: 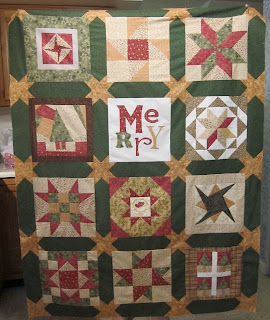 It's still not completely finished because I decided to add another border, and I ran out of fabric.  I just hope I can find enough to complete it.  I didn't like the way the stars just ended, so I added the border to finish the stars.  I was able to put two sides of the border on, and I have all the flying geese done to finish the stars.  I also pieced the backing with siggy squares from the participants in the Bee, some yardage, and some scraps.  The binding is all make, so this will be a finish soon.  Cross you fingers that I can find the necessary green fabric! 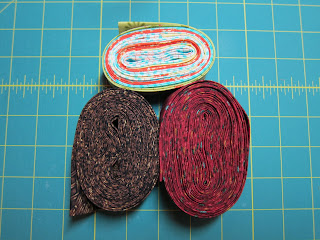 Bindings and backings are also done for my little spool quilt and my black-eyed Susan quilt.  In order to do the pin basting, I have to completely clean off my sewing table, so I like to have a few in the pile before I do it.
Busy, busy busy.  It feels great to get so many things finished.  In order to keep making forward progress in 2012, I've signed up for Barbara's NewFO Project at Cat Patches 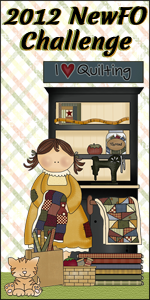 I really don't have a lot of UFO's, but I do have a lot of fabric and patterns that have never been started, so this is the perfect group for me.

I've also signed up to make one Christmas ornament each month, and I've just learned that Christmas Through the Year is going to continue, with Darlene and Cheryl picking up the reins to allow Allie to move on to other  pursuits.

I also decided to make the little Mystery Quilt by Temecula Quilts.  If you haven't heard about it, check it out!  There are only 12 little blocks, and the first day was only one piece, the second day had two pieces, etc.  Day Nine was released today, so I better head back down to the sewing room.  Here are my first 8 blocks.  Apparently there was a kit that could be ordered, but I just shopped from my scrap basket. 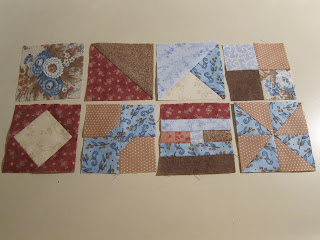 So, I think that should be enough to keep me on task and keep my quite content throughout the year.  I really need to get back to blogging more often so that each post doesn't become an entire novel. 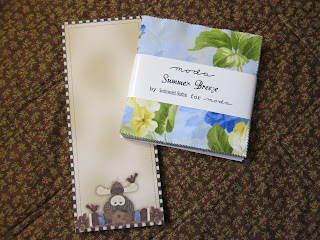 But, before I go, I need to thank Vickie for the beautiful Charm pack that I won.  She also tucked in a cute little notepad.  Thanks Vickie!

“We tend to forget that happiness doesn't come as a result of getting something we don't have, but rather of recognizing and appreciating what we do have.”           Frederick Keonig